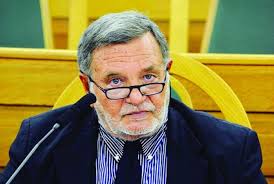 Roberto Toniatti was born in Trieste on 7 March 1950.

He graduated in Law at the University of Bologna in 1975 and worked as a research fellow at the chair of Constitutional Law at the same university until 1980, when he joined the faculty as a researcher.

In the same years he directed the Research Area "Institutions and Economics" of the Istituto Trentino di Cultura (2000-2005), the Summer School on Comparative Constitutional Adjudication (CoCoA) within the Marie Curie Programme of the European Union (2006-2009) and the "Trento Workshop on European Governance" (TWEG) (2002). He co-directed with Joseph Weiler the two editions of "European Legal Integration: The New Italian Scholarship" (2005-2006 and 2007-2008).

In the framework of the Italian national research projects PRIN, he participated in the projects on "Institutional Pluralism, Community Identities, Global Policies. Characters, variants and crisis of contemporary federalism" (1997-1999), "The development of structures and powers of the European Union as a process of constitutionalization" (2000-2002), and, as the national coordinator, in "Pluralism in the constitutional transition of the Balkans" (2005-2007), as well as in "Jurisdiction and pluralism" (2010-2011).

From 1995 to 1998 he was a member of the "round table" of experts who developed the basis for cross-border cooperation between Trentino, Adige/Südtirol and Tyrol and is an honorary member of the Euroregional Association of Comparative and European Public Law (www.jus-euroregionale.org) which he founded together with a group of lawyers from Innsbruck, Bolzano and Trento in 2004. In 2016-2017 he was a member of Convention 33 of the Autonomous Province of Bolzano for the reform of the Statute of Autonomy.

Since 2013 he has coordinated the activities of the "Laboratory of Institutional Innovation for Integral Autonomy" at the University of Trento (www.liatn.eu).